The Auld Kirk's collection reflects the rich history of the local area. From Roman artefacts to innovations of the 20th century, around 13,000 objects reveal the social, industrial and everyday activities of people who lived or worked in East Dunbartonshire.

Objects in our care range from the commonplace, such as a postcard of Kirkintilloch railway station, to the unexpected, for example, our Japanese Whisky bottle. We also have some very special items, among them a Neolithic carved stone ball from around 3,000 BC, found in a garden in Lenzie.

Some highlights of the collection include: 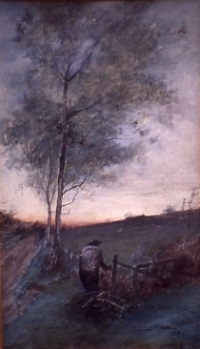 In addition to being one of ‘The Glasgow Boys’ Robert Macaulay Stevenson (1854-1952) has been attributed with coining the name.

He was heavily influenced by the French ‘Barbizon’ school of painters, so called because they worked in the vicinity of the Barbizon forest near Fontainebleau during the mid seventeenth century.

Stevenson was particularly impressed with the work of Jean-Baptiste Camille Corot (1796-1875) and produced landscapes that concentrated on rural life.  Like Corot, he employed muted colours and tonal effects, the silvery greys and misty green that characterised his twilight paintings earned him the nickname, ‘Moonlighter’.

Stevenson referred to his work as ‘Constructive Idealism’ and explained the term thus, "The colours fade, the aspect changes, the leaves die, the picture as it was in Nature ceases to be: the recollection remains, and that memory I transcribe on to canvas." 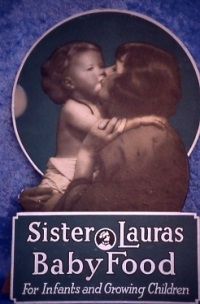 Sister Laura’s Infant Food Company was established in Bishopbriggs in 1911 as a result of efforts by Laura M. Smith who worked as a nurse at The Royal Hospital for Sick Children in Glasgow.

Distressed by the lack of proper nourishment endured by many children she developed a powdered milk supplement which when added to undiluted cow’s milk made it more digestible for young and weak children.

The basis of the recipe was high quality milled wheat which was subjected to "great heat to dextrinize the starch".  While originally intended only for children, Sister Laura’s Food was also marketed to "invalids and convalescents", "expectant and nursing mothers" and was recommended as an aid to digestion and a palliative for insomnia.

A special discount of 5% was offered on all orders over £3 if chemist retailers displayed in their windows the Sister Laura display material for seven days. 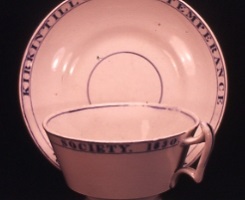 The Temperance or Teetotalism movement advocated total abstinence from all intoxicating liquors.

Abstainers argued that their movement was sanctioned by scripture, that temperance would abolish certain diseases, would help prevent crime and poverty and save the nation immense sums of money.

The cup was used at the Society’s “Coffee Suppers”, the purpose of which was to promote the moderate use of alcoholic liquor, however, by 1837, The Total Abstinence Society had been formed, “its object being the personal abstaining from all alcoholic liquors as beverages, and the using of moral suasion to get others to do likewise.” (Kirkintilloch Herald, 21 January, 1901). 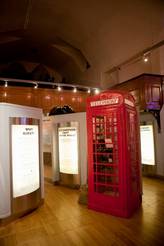 Manufacture of the traditional ‘K6’ type telephone kiosks was begun at the Lion Foundry, Kirkintilloch, during the mid-1930s.  The ‘K’ stands for Kiosk.  K1 was made of concrete and introduced in 1921.

The all-red kiosk, designed by Sir Giles Gilbert Scott, was a familiar sight throughout Britain and by the end of the 1930s, 20,000 were erected. The K6 was produced by five manufacturers:

The Lion Foundry opened in 1880, however, the abandonment of cast iron kiosks by British Telecom in 1984 signalled the end of the foundry’s existence.

This model is fitted with the Queen’s crown of Scotland, a detail Introduced post 1955 into the K6 destined for use north of the border.

Our collection of oil paintings can now be viewed online at Your Paintings, a website which aims to show the entire UK national collection of oil paintings, the stories behind the paintings, and where to see them for real. It is made up of paintings from thousands of museums and other public institutions around the country. Your Paintings is a joint initiative between the BBC, the Art UK (a registered charity) and participating collections and museums from across the UK.

Unfortunately it is impossible for all of our objects to be on display at any one time so the majority of the collection is kept in storage. From time to time, objects are removed for display purposes or for conservation work. If an object is not on display, it can be made available for private research and education by prior arrangement in writing.

You can search our online catalogue for items in our museum collection.

By caring for and developing the collection, we will ensure that objects continue to be relevant, and are preserved for your future generations.

Further information is available from the Museums Development Officer.

Objects are collected in several ways - by gift or donation; by purchase; by transfer from another museum; or by bequest. The museum has a collecting policy which limits our acquisitions and we only accept items for our collection which are of relevance to East Dunbartonshire and are of known provenance.  If an object is not suitable for inclusion in our museum collection, we may contact the owner and check whether they are happy for it to form part of our handling collections, an important resource used by schools and community groups for interactive learning. The Museums Service Collection Development Policy is revised every five years and is approved by the board of East Dunbartonshire Leisure & Culture Trust.

Further information is available from the Museums Development Officer.