There are a number of famous people, notable for their contribution to the history of the local area,  linked with East Dunbartonshire. Some of these  famous figures have gained national and international recognition for their achievements. 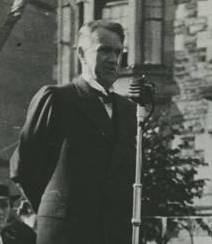 Tom Johnston was one of the leading Scottish politicians of the twentieth century.

In 1913 he was elected to Kirkintilloch Town Council and made an immediate influence. He set himself up as the champion of municipal housing and became involved in the introduction and development of many other council services. He left the Council in 1922 to concentrate on national politics, but retained many links with Kirkintilloch. In 1931 he became the first Freeman of the Burgh.

Johnston gave outstanding service during World War II as Secretary of State for Scotland. He retired from Parliament in 1945 but in the post-war years he served as Chairman of the North of Scotland Hydro-Electric Board, The Scottish National Forestry Committee and The Scottish Tourist Board. Many new ideas were introduced in all of his spheres of influence. His legacy remains right down to the present time. 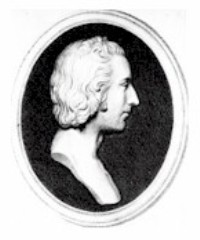 In 1792, at the age of seventeen, Thomas Muir abandoned his Divinity studies at Glasgow University in favour of Law. This was also the year Thomas’s father bought property at Huntershill in the Parish of Cadder and Thomas adopted the style of extended name then customary in Scotland and became Thomas Muir, Younger of Huntershill.

When the French Revolution stimulated a desire for parliamentary reform in Britain, Muir associated himself with the radical wing of the movement.  He was charged with sedition and stood trial on 30th August, 1793 for "exciting a spirit of disloyalty and disaffection", for recommending Thomas Paine’s "Rights of Man" and for distributing and reading aloud inflammatory writings. Muir defended himself at the trial but was found guilty by Lord Braxfield and four other anti-reform judges and sentenced to fourteen years transportation to Botany Bay in Australia.

In 1796 Muir arranged his escape to America aboard the "Otter".  Shipwreck, captivity among American Indians, detention in Mexico and imprisonment in Havana followed.  Whilst returning to Europe he was severely wounded in a naval engagement with the "Ninfa".  It was as a result of these wounds that he died less than two years later at Chantilly in France.

He is justly remembered as the Father of Scottish Democracy. 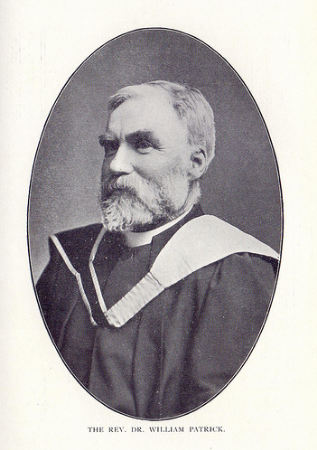 The son of a draughtsman, William Patrick was born in Glasgow on 8 Sep 1852. He was educated at Gorbals Youths' School and Glasgow University, where he graduated with first class honours in mental philosophy in 1875. Between 1874 and 1878 he studied at the Free Church College, Glasgow, and was ordained in 1878.

From 1878 to 1892 William Patrick was minister of Free St David's Church, Kirkintilloch, where his personality and progressive ideas steadily increased church attendance. His younger brother, David Patrick, who joined him in Kirkintilloch in 1884, was a partner in the legal firm of Patrick & Paterson, and was Town Clerk of Kirkintilloch from 1887 until his death in 1941.

To the consternation of some, William Patrick combined his religious ministry with politics. He was elected to Kirkintilloch School Board in 1885, and was chair of the Board until 1891. He was also a lifelong abstainer and helped to form the Kirkintilloch Temperance Union; the Temperance campaign became particularly strong in Kirkintilloch, leading to the town becoming ‘dry’ from 1921 to 1968.

In 1892, William Patrick left Kirkintilloch to become minister of Free St Paul's Church, Dundee, and in 1900 he took up the post of Principal of Manitoba College, Winnipeg, Canada. He returned to Kirkintilloch in 1911 when he became seriously ill, and died the same year. He is buried in the Old Aisle Cemetery. 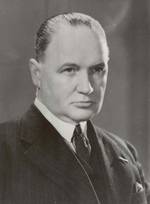 George Bennie was born at Pollokshaws, Glasgow, in 1892, the son of an engineer. In his youth he began to show signs of his ability as an inventor and several patents were registered in his name.

During the 1920s, he turned his attention to a revolutionary new concept of public transport. His idea was to get railways off of the ground and into the air. Bennie believed that fast passenger traffic should be separated from the slower heavy goods trains.

Essentially a monorail, the 'railplane' would be built above the existing railway system as a passenger-only service, while the slower freight trains would travel below. Bennie hoped that his invention would regain revenue which had been lost because of rail inefficiency.

During 1929-30 Bennie built a test track at Burnbrae, Milngavie, above an existing railway branch line. The result was like a scene from a Jules Verne novel. The strange looking contraption was more like a giant cigar than the latest mode of transport. The car was suspended from a 130-metre girder, while wheels underneath ran on a stabilizer rail to prevent the car from oscillating from side to side. The car was powered by a large propeller at either end. It was said to be capable of travelling at 120mph.

The official launch, on July 8th 1930, received a great deal of publicity. During succeeding weeks many visitors came to admire and travel on the revolutionary new invention. It looked as if the Bennie Transport System couldn't fail. The railway companies were interested because of the lower cost of the railplane as compared to an ordinary railway.

Sadly, George Bennie was never able to find financial backing for further development of the system. He had invested large amounts of his own money in the construction of the test track and by 1937 was said to be bankrupt. He died in obscurity in 1957. The railplane and track remained in position at Burnbrae until 1956, when it was sold for scrap.

If you want to find out more about the Bennie Railplane, a book is available from East Dunbartonshire Leisure & Culture Trust, price £3.30 (plus £2.00 postage and packing). Make cheques payable to East Dunbartonshire Leisure & Culture Trust. Please print out the order form, complete and post with remittance to: Information and Achives at William Patrick Library. 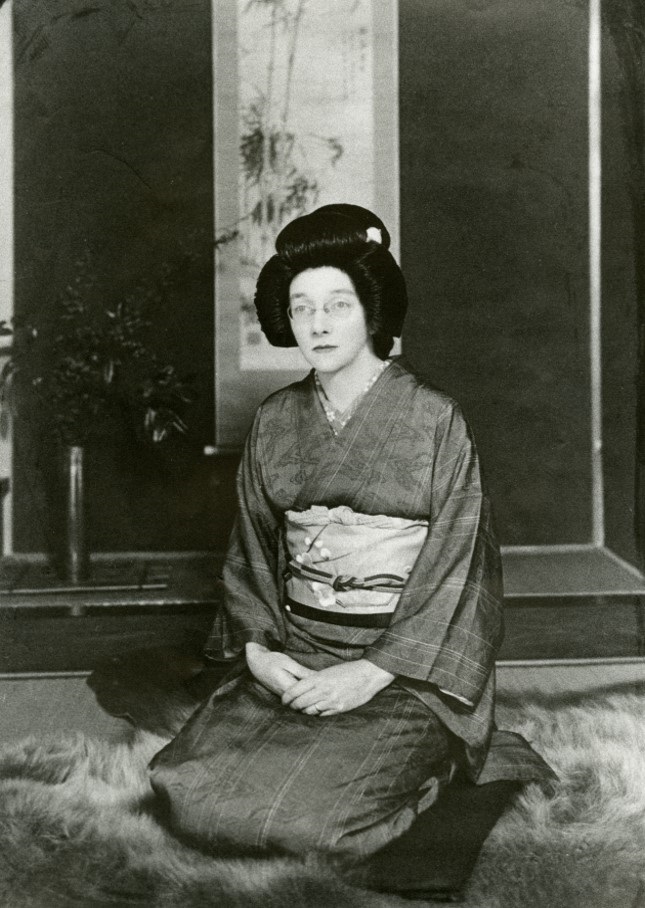 In 1920 Rita Cowan, a doctor’s daughter from Kirkintilloch, married a Japanese chemistry student, Masataka Taketsuru, and together they made a new life in Yoichi, Japan. Masataka founded the Nikka Whisky Distilling Company. Rita supported her husband and became known as the ‘Mother of Japanese Whisky’.

Rita and her family lived in Middlecroft House, a large villa in Kirkintilloch. Rita attended Lenzie Academy from 1908 to 1913. Prior to this she was privately educated at home.

Following Dr Cowan’s death, Mrs Cowan took in a lodger to help with the family finances. The lodger was a young Japanese man called Masataka Taketsuru. He had come to Scotland to learn how to make whisky and as part of this research he enrolled in organic chemistry classes at the University of Glasgow in March 1919.

Rita and Masataka developed a close relationship and married in January 1920 at Calton Registry Office in Glasgow. The couple moved to Japan and adopted a baby girl named Rima. Masataka established his own distillery at Yoichi, marking the beginning of what was to become the major Japanese drinks business, Nikka.

To find out more about Rita and Masataka’s story, visit Kirkintilloch Town Hall to see the permanent display about the couple, or look out for these books about Rita in EDLC Libraries:

Rita : the Scottish girl who married the founder of Japanese whisky

In 2015 a Japanese TV programme based on Rita and Masataka’s story was broadcast by the Japanese national broadcaster NHK. The title ‘Massan’ was Rita’s pet name for her husband. The series consisted of 150 daily 15 minute episodes. The role of ‘Ellie’ a fictional character based on Rita was played by American actress Charlotte Kate Fox. 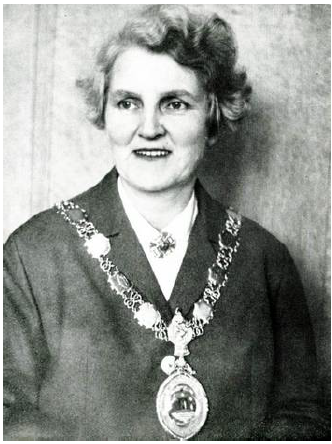 In 1958 Jenny (Janet) Coutts of Heath Avenue, Lenzie was elected as Kirkintilloch Town Council's first female Councillor. She later went on to become the town's first female Provost in 1964.

Councillor Coutts kept news cuttings relating to local politics, pasting them into a series of hardback volumes. The volumes are permanently preserved in our Archives as a fascinating record of her civic career.

Janet Maxwell Barclay was born in 1909 in Carnwath, South Lanarkshire, the daughter of Gavin and Janet Barclay. After leaving Lanark Grammar school she completed a secretarial course and worked in offices at Bath Street, Glasgow. She later met her husband Willie Coutts through the International Club. The couple moved to Lenzie in 1949 with their two sons and Jenny Coutts quickly became a part of the community.

Mrs Coutts devoted her life to helping others, working tirelessly for the community as a councillor, charity worker and campaigner. For twenty years she served the Lenzie ward as in independent councillor, becoming the first female Provost of Kirkintilloch in 1964. She was awarded an MBE for her contribution to social work in 1973, and was a Justice of the Peace.

Jenny Coutts believed passionately in community spirit, often saying: “It’s not what you can do for me, but what I can do for you.”

Jenny Coutts was one of Kirkintilloch’s longest serving council members. She died on March 18th 2008 at the age of 98. An environmentally friendly service was held at Langfaulds Cemetery, Bearden, while over 150 people attended the memorial service at Lenzie Union Parish Church to pay their respects.