One of East Dunbartonshire's railways, the Monkland and Kirkintilloch, is of historic importance. When opened in 1826 it was the second railway in Scotland (after the Kilmarnock and Troon) to be authorised to carry public goods and passengers. However, it was the first to successfully introduce haulage by steam locomotive power. In 1831 it so became "Scotland's First Steam Railway." It was built to carry coal from the Monklands to the Forth and Clyde Canal at Kirkintilloch, from where it was usually shipped to Edinburgh. The Kirkintilloch terminus was in Southbank Road.

The second railway in East Dunbartonshire was the Edinburgh and Glasgow, with stations at Bishopbriggs and Lenzie. When built this was the first of several railway routes between Scotland's two main cities. It remains today as the most important. In 1848 a branch was built to serve Kirkintilloch (with a station at Eastside), Milton of Campsie and Lennoxtown. This was extended through the Blane Valley in 1867, with a station at Campsie Glen, and eventually reached Aberfoyle. 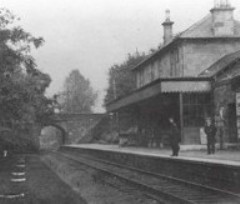 The railway arrived in Bearsden in the year 1863, when a station on the new Milngavie Branch was opened there. Glasgow businessmen soon began to settle, and a proper community began to develop during the 1870s and 1880s.

The Glasgow and Milngavie Junction Railway was opened in 1863, as a branch of the Glasgow, Dumbarton and Helensburgh Railway (opened 1858). There were originally just two stations, at Bearsden and Milngavie, but a third was added at Hillfoot in 1900. Another station, to serve the new Westerton Garden Suburb, was opened beside the branch junction in 1913.

The final railway route to be opened in East Dunbartonshire was the Kelvin Valley line in 1878-79, with stations at Bardowie, Balmore, Torrance and Twechar. This route was closed to passengers in 1951, as was the Kirkintilloch-Aberfoyle section of the Campsie line.

The remainder of this branch, from Lenzie to Kirkintilloch, lost its passenger service in 1964. The Edinburgh-Glasgow and Westerton-Milngavie lines remain open to passengers. Some of the local stations were recently provided with a Sunday service.