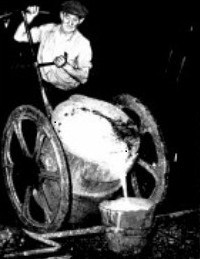 Moulder at work, using a 'bogey' for conveying molten iron. You can see a bogey of this type at the Auld Kirk Museum, Kirkintilloch.

During the nineteenth century a very wide range of products was made of cast iron. Foundries were established in many Scottish towns. At Kirkintilloch the canal and railways meant that iron could be easily conveyed to its markets. This, along with the many local coal mines providing fuel, made Kirkintilloch an ideal centre for the ironfounding industry. Iron work made in Kirkintilloch was exported all over the world.

Ironfounding began in Kirkintilloch during the 1830s, when Archibald Gilchrist established the "Kirkintilloch Foundry" just south of the Canal Aqueduct over the River Luggie. In the early years Gilchrist found a niche market in railway castings to service the embryonic but fast developing railway industry. Later on the foundry specialised in heavy engineering castings, but it ceased to function during the 1890s, when the building was taken over by F. McNeill a Co. for the manufacture of roofing felt.

In 1861 a second foundry was established in Kirkintilloch when Alexander Smith opened the "Star Foundry" in Southbank Road. In 1867 it was purchased by the locally well-known firm of Cameron and Roberton who renamed it "South Bank Iron Works", although it remained the "Star Foundry" in local parlance for the rest of its life - which lasted until 1981. For most of its 120 years it was best known for the manufacture of commodities in the category of "Rainwater Goods" - drains, gutters, pipes and pipe fittings.

The Lion Foundry, just across the Canal from the old Kirkintilloch Foundry, was established in 1880. The site of the new foundry was well chosen, right beside the North British Railway and the Forth and Clyde Canal. This proximity to the two main arteries of communication meant that raw materials could conveniently be delivered, and the finished products distributed economically. The best known products to come out of the foundry were red telephone kiosks and post boxes. The foundry was also noted for its highly decorative architectural ironwork such as railings, fountains and bandstands. The Lion Foundry survived for over a hundred years and was the last of the town's foundries to keep working, but when British Telecom stopped ordering red telephone kiosks in 1984 it closed down. 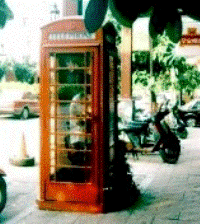 A fourth iron foundry in Kirkintilloch was the Basin or Etna Foundry, at the canal basin in Southbank Road, which opened in 1872. It specialised in kitchen ranges, grates and heating stoves, which were fitted into houses throughout Scotland, England and Ireland. Like "The Star" and "The Lion" it was established on the canal bank at a location where rail access was also immediately available. Typically, raw materials would be brought in by canal boat and finished products taken away by rail.