One of the most beautiful places in East Dunbartonshire is Campsie Glen, near Lennoxtown, with its adjacent village, known as the Clachan of Campsie.

The Clachan is a designated conservation area. It is important that visitors to both village and glen respect this and do not leave litter or cause any damage.

A wander round the village has much to offer, with some features worthy of special attention. 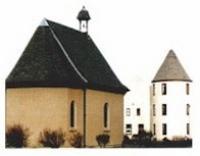 Schoenstatt Shrine Set in its own extensive grounds, this purpose built Retreat and Conference Centre is run by the Schoenstatt Sisters of Mary and offers the perfect setting to reflect, and find peace and tranquillity. The Shrine dedicated to Our Lady of Schoenstatt has become a place of pilgrimage for thousands of people each year. The adjacent Ballencleroch House can accommodate up to 32 guests in 15 twin-bedded and two single rooms - all with en-suite.

The Shrine and House are open throughout the year, with the grounds providing pleasant walks suitable for the disabled. At Ballencleroch House you are assured of receiving a warm welcome and enjoying a peaceful and relaxing time.

The Clachan Church and Graveyard (shown), in their picturesque setting, have always been a major attraction for visitors to Campsie Glen.

The church took its name from St Machan, who brought Christianity to Campsie during the Dark Ages. After travels to Ireland and Italy, he erected a small chapel at the foot of the Glen and used an adjacent well for baptisms.
On his death, he was buried at the site and the first parish church was erected over his grave around 1175.

The Clachan Church survived many alterations over the years, with the last substantial re-build in the 1770s. Not long after its abandonment in 1828, it was decided to take down most of the old building to raise money from the fittings.

During the 1850s the bell tower was still complete and the bell continued to be rung for funerals and for Sunday evening meetings at the parish school nearby.

Shortly afterwards this practise was stopped and the bell removed, first to the Oswald School in Lennoxtown and then to Milton of Campsie Church, which opened in 1888.

The old parish school can be seen on the left-hand side of the road into the Clachan. The original school was erected in 1661, under the patronage of John, Archbishop of Glasgow, and the deed of erection stipulated that the schoolmaster "in all time coming" should teach Latin.

The school was operational until June 1978, when the building ceased to be used for its original purpose. However it is still worth a look when you are in the village.

Formerly the Crown Inn, the Red Tub Tearooms were opened in 1922. They were run by a group of well known local ladies.

Between 1936 and 1938 the Red Tub was used as a training centre by the world champion boxer Benny Lynch. This introduced a new attraction to the Glen and thousands flocked to the Clachan in the hope of catching a glimpse of their hero.

When the Tearooms finally closed, the building became a private dwelling, and changed its name to Aldessan House. It was occupied by the postmistress for a period and the adjoining shop converted into a sub-post office and shop.

The Aldessan Gallery, Clachan of Campsie

This closed during the 1970s and the building lay empty for a number of years, before being renovated in the mid-1980s. On Friday May 6th 1988 it was re-opened as the Aldessan Gallery - a craft shop and tearoom still in operation today and well worth a visit.