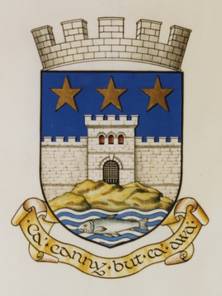 Azure, a wall towered and embattled Argent , port sable, standing upon a mount proper; in chief three stars of five points Or, and in base in a stream a fish naiant proper"

Although established as a burgh in the 13th century, Kirkintilloch received an official grant of arms from the Lord Lyon in 1938.  The heraldic description is quoted above.

The wall towered and embattled represents the Antonine wall and Roman Fort, the three stars symbolise the holy trinity and the fish represents trout in the rivers Luggie and  Kelvin.

Under the shield is placed the motto, Ca'canny but Ca'awa which was translated as Progress with vigilance when adopted by Strathkelvin District Council in 1975.

Carry on carefully, but keep carrying on is thought to refer to the advice an expert weaver may give to a novice weaver when working a hand loom.