On 2 October 1211, King William the Lion granted the liberty of a burgh at Kirkintilloch to William Comyn.  The Comyn family established a castle in central Kirkintilloch at Peel Park, 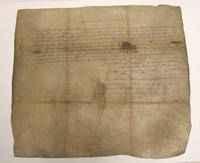 with a parish church to the south (at the locality now occupied by the Old Aisle Cemetery). This meant that Kirkintilloch became only the second burgh of barony in Scotland (after Prestwick) to be created as such, though there were about thirty royal burghs in existence by that date.  The original charter has long been lost, but a sixteenth century notarial copy survives.

Grant of the liberty of a burgh at Kirkintilloch

William, by the grace of God, King of Scots, to all honest men of his whole realm, clergy and laity, greeting.  Let those present and to come know that I have granted, and by this present charter confirmed, to William Cumyng and his heirs that they should have a burgh at Kirkintulloch, and a market upon the Thursday with the liberties and privileges belonging to a burgh, as freely and as undisturbed and as honourably as any of my barons have a burgh from me as a gift within my realm.  Witnesses, Alan, son of Ronald, my constable, William de Boscho, my chancellor, Philip de Valeniis, my chamberlain, Philip de Mowbray, Alexander, my Sheriff of Stirling, Harbert de Camera, Adam, his son.  Given at Forres, the second day of October.

And extracted out of the Register of the Dean, Canons and Chapter of the Metropolitan Church of Glasgow by me Richard Harbertsoun, Notary Public, and Clerk of the said Chapter pro tempore, witness my hand.     RH

Ita est, Richard Harbertsoun, Notary Public and Clerk of the said Chapter, as above mentioned.     RH

Ita est, Robert Blair, Notary Public and Co-Notary in corroboration of the subscription of the before written Notary by his request.  Witness my proper hand.     RB

Of fundamental importance was the liberty to hold a weekly market.  It can be accepted that Kirkintilloch was a market period from this time onwards.  The charter is dated 2 October, but no year is given. The question of the year was for long a matter of great controversy.  In 1894 Thomas Watson commented that “most writers give 1170 as the year, and others of 1184, but on what grounds we are unable to discover.”  In 1910, John Horn felt confident to state that the charter “was granted by King William the Lion in 1170, or thereabout.”   In 1937 Thomas Johnston ventured that the charter dated from the “some year at the end of the XII century”.  Then, in an article in the Scottish Historical Review of April 1950, Professor G.S. Pryde convincingly argued that the charter should be assigned to the period 1211-14, right at the end of William the Lion’s reign. He pointed out that William de Boscho was not appointed Chancellor until June 1211.  To be on the safe side, Kirkintilloch Town Council decided to celebrate the 750th anniversary of the burgh in 1964, the latest possible year.  It now appears that they were over cautious.  In his edition of The Acts of William I, published in 1971, Professor G.W.S Barrow confidently assigns the charter to the year 1211, the given reason being that “William Cumin had become Earl of Buchan by August, 1212."