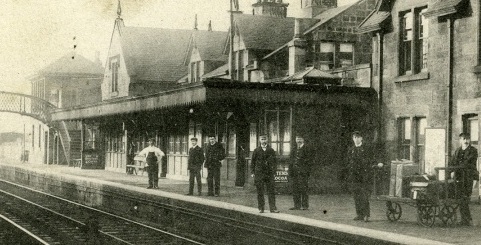 Lenzie The station opened in 1842 but Lenzie was not fully established as a centre of population until piped water arrived in the 1870s.

The name "Lenzie" is very old indeed, although the same cannot be said of the place that now bears it. The original Lenzie was an ecclesiastical parish that extended from Kirkintilloch south-eastwards as far as Cumbernauld. The lands of Lenzie were for many years possessed in their entirety by the Comyn family, who build a castle in Kirkintilloch. The name was pronounced "Lingie" at that time, and for many years thereafter.

The history of modern Lenzie can be traced back only to the year 1842, when the Edinburgh and Glasgow Railway was opened and a station established there to serve the town of Kirkintilloch. The building of houses for Glasgow commuters, close to the station, began about 1848 and was given impetus by the railway company's scheme of the 1850s to offer free season tickets to persons building large villas near any of its stations.

However, large-scale construction did not begin until piped running water was made available to the villas during the 1870s, by which time the free "villa tickets" scheme had been discontinued. The housing and population boom of the 1870s is reflected by the fact that all three of Lenzie's main churches - the Old Parish, the Union and St Cyprian's - were established during that decade. The growth of Lenzie as a convenient place of residence for Glasgow commuters has continued ever since.

The railway station was opened to serve the town of Kirkintilloch, and was accordingly named "Kirkintilloch" at first. During the 1840s it was relocated to Garngaber, for a short period. In 1848 it was moved back to its present site, and with the opening of a branch to Lennoxtown it was renamed "Campsie Junction." The extension of this branch to Campsie Glen and beyond, in 1867, rendered the name anomalous, and the railway company (by then the North British) chose the old parish name of "Lenzie" to replace it. The station and its environs have been known as Lenzie ever since (although pronounced differently from the old parish).